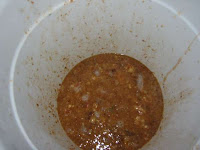 Next thing you know, she'll be on Question Time shouting down Ian Duncan-Smith (while trying her very hardest to suppress twinges of a regional accent) to rapturous applause from the carefully selected audience, while Owen Jones nods sagely in the background.  Born is another one of these middle class, self-regarding cretins who makes a career on the back of a few months of hardship (the same as virtually every student in the land has had) because she "knows what it's like to be poor and living off benefit".  She'll go far.  Maybe even the green benches.  I'm after you with the sick bucket.
Posted by Pete North at 14:59