My brexit, your brexit or their brexit? 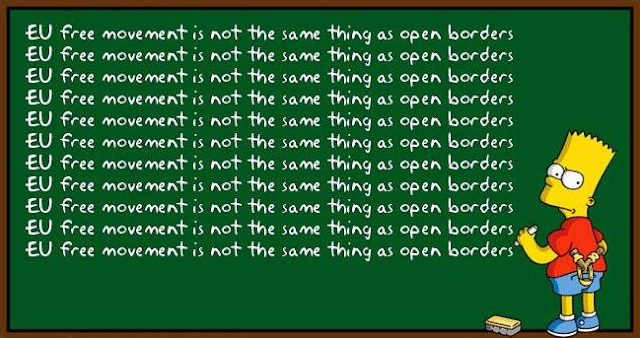 The reason the government does not have a direction on Brexit is because there is a battle going on to define what Brexit means. Hard liners think we can get by with no deal at all. Then there are those who think we can spend years coming up with a custom arrangement and then there are those moving for something more pragmatic. An off the shelf solution.

And there really is no compromise on this. one is a complete departure from international law and a complete reset of everything, the other is a limbo and the EEA is something workable but not too far removed from what we have.

A complete reset of everything as per what is known as the WTO option seems superficially appealing but when you start to look at the real world consequences it looks far less appealing. We might complain about regulation and technocracy but in the modern age it is as certain as death and taxes. There is no escaping it. More to the point, it doesn't deliver on its promises. There are no sunlit uplands of "free trade" and there is definitely no money in the kitty for firehosing on the NHS.

The limbo model, the model which is "some form of free trade agreement" is one that ignores the highly technical and complex peripheral concerns which dwarf the issue of trade. That is what takes years to sort out. It seems that this route is becoming the more popular largely because it is vague by definition. It is only defined by what it isn't. It is neither the WTO option nor is it the EEA Norway Option.

Then there is the EEA Norway option which is adequate - but hard liners see it as Brexit in name only and not sufficiently brexity.

So like I say, there's little room for compromise. It seems the government is also quite determined to make immigration a red line even though it was not the lead reason for voting for Brexit. This is the power of narrative at work. There is also a lack of political courage in speaking up for the truth that ending freedom of movement largely accomplishes very little at great cost.

So it seems, in the absence of a champion, the EEA route is struggling to win traction among opinion formers and those in power. We will manage to fend off the hard right who want to pull the plug on all of it but the course will be set for a magical mystery tour of of this unspecified third way.

That means we are presently looking at several years just to negotiate and then several more years to transition. As it happens this could be avoided by negotiated in the EEA terms up front as is our right as an EU member and then invoke article 50 to deal with the rest but this is a point lost on MPs and commentators.

It would seem many options MPs are quite keen on the EEA option and so is the new incarnation of the Stronger In campaign. It does have allies but none in any position to wield much influence. Now is about the time where it might have been useful to have a functioning opposition party but restoring the railways the to glory days of 1989 seems to be their leading concern in all this. Meanwhile, the Lib Dems see an urgent need for a 5p tax on coffee cups. That should see them roaring back to life imminently.

The ultimate enemy in this is prestige. There are supporters of the WTO option who are wrong, know they are wrong but will not speak against the consensus of the group. None wish to be an outsider. In this it's perfectly acceptable to write complete and utter drivel so long as it is not a threat to the orthodoxy and is not in conflict with the words of prestigious sources.

Then there are those who know full well that the EEA option does give us much of what we want but are afraid to challenge the normalised lie that Norway must accept full freedom of movement and has no say in the rules. Again, it is cowardice.

And so politics being what it is, we will attempt to negotiate something else. We don't know what that something is, how extensive we want it to be, what we want it to cover and if possible we want to be outside of the single market while participating in all the features we like, none of the ones we don't and paying nothing into the budget. That is the only politically acceptable position within the bubble yet Mrs May cannot press the button because absolutely everybody privately agrees that this nonsense is for the birds.

This is why we absolutely must have a parliamentary vote on which path we choose. In this I have every confidence that opposition MPs can defeat the Tory right while at the same time collectively bringing some sense to the proceedings. Looking at the mess in front of us, you can hardly blame remainers for wanting another referendum regardless of how implausible an idea it is.

What it now looks like is that no agreement will be reached before invoking Article 50 and Mrs May will have to choose a path of least risk - but this will be in the final hour where we will pay severely for not having a coherent plan or an endgame in mind. It may be that we won't know what Brexit means until we are actually out.

This of course does not change my view that we should leave. This is just the process we have to go through to correct a historical mistake. It's just a pity we will harm ourselves in ways that could have been avoided. People will look back and ask where it went so wrong. Well, mark this moment in time. Because this is where it went wrong. The bit where people should have been engaged and making a saner case rather than waving placards saying "invoke Article 50 now!" Ho hum.
Posted by Pete North at 13:18