Why the bubble doesn't get Ukip 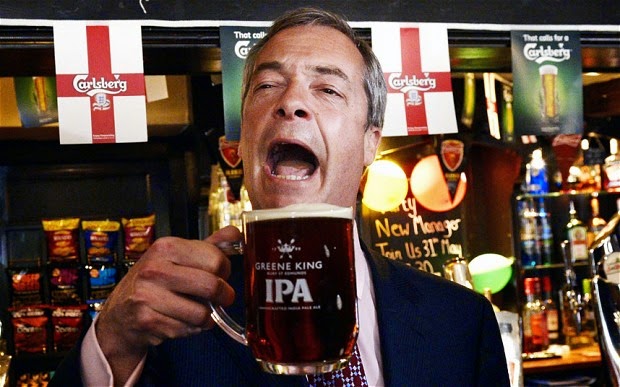 James Forsyth, Mark Wallace, Tim Montgomerie, Matthew Goodwin and all the Tory circle-jerk (TCJ) claim to understand Ukip but they don't. We see florid articles about the "left behind" and the disaffected and how Ukip taps into that, speaking up for the long ignored little guy - and that's why Ukip, apparently will go on and on and on. Tim Mongomerie is starting to get a clue, but the prestige of the rest is tied up in the narratives that really belong to last May.

Some of the base assumptions are true. In a complex, bewildering world where change is constant, things just accelerate beyond the capacity for many people to comprehend. So simple solutions are appealing and that's what Ukip offers. Close the borders, leave the EU, ban political correctness, deport illegals, stop foreign aid, save the NHS. Motherhood and apple pie.

Were things that simple, the "establishment" would already be doing it. But a little research in all these areas shows there is nothing simple about any of it. Because the main parties of government are not enacting any of these simplistic policies it gives the impression that the "working class" are ignored and undervalued. And cornering that market is the one thing Ukip succeeded at.

Every era of progress has its casualties. Some can reinvent, but some stagnate. The psychology of Kippers is they are confused and alienated by modernity. I have some sympathy with that view. Who isn't a little bit bewildered? But that is a highly fragmented constituency with old loyalties dating back decades. And they're a fickle bunch.

As much as there is no great love of Labour in the North, the Tories are still hated. I'd sooner declare myself a storm-trooper of the Third Reich than a Tory in Sheffield. If there is any danger of a Tory win at the general election, they will vote Labour same as always. That's why we're seeing a two horse race emerging. And we will see that dynamic magnified over the next month.

So one might ask why Ukip has such a fickle following. Simple. It's a brand. Brand loyalty has always be fickle. Were Ukip a movement that had issue specific local campaigns, not least a long running campaign to reform local government, using the influence it has in councils and feeding back to the party machine, it could show real achievements and demonstrate that it is here to stay. But Ukip doesn't do any of those things. We get the feeble excuses that Ukip does not whip its councillors but that just means the leadership (Farage) has no idea what to do with them or even how to task them to an objective. Many mistake Farage as a good leader, but in reality, he is a very poor leader and a very poor strategist.

Farage wings it on every occasion. We're in a general election campaign and there's still no manifesto, and policy is still whatever Nige says it is and as for strategy, it's more about bums on seats than actually achieving anything and demonstrating competence. And this is why so many read Ukip wrong. They are used to analysing parties like the SDP, the SNP and the LibDems, all of which were or are parties in the traditional sense. The SNP has strong, independent local branches gradually eating away at the influence of Labour by engaging in the local politics and securing victories and meeting objectives. But Ukip councillors are just flapping in the wind.

If you apply normal political analytical methodology to Ukip as indeed Goodwin et al do, you can see why they arrive at the conclusions they do. Their logic is perfectly sound were they dealing with a political party. Were Goodwin to apply his considerable psephological skill to the SNP, his conclusions would probably be bang on the money and I wouldn't argue, but the key to understanding Ukip and how it will behave requires something more than rune-reading. It requires an insider insight into Ukip's history, some of which is emerging, but ignored as "sour grapes", but also an examination of Farage's psychology. For he and Ukip are the same thing. Ukip IS Farage.

The critical misapprehension is that Farage is a leader - and one who strategises. The Tory circle-jerk think that the expansion into BNP territory was a strategic move. It wasn't. There was money on the table with conditions, and when Farage should have said no, he said yes and that's what's behind the immigration posters and the immigration agenda. That is what ruined Ukip for reasons I have already outlined. There was no strategic thinking to it. It was all about Farage's ambitions for publicity over building a strong and coherent movement.

Now, as several commentators, including the TCJ, have cottoned on to the fact that Ukip is riding two horses, but continue to postulate that Ukip will strategise on how to grow that Northern agenda. Because Goodwin has forged a seemingly credible interpretation of Ukip's "strategy", that is now the figleaf Ukip now adopts to explain its clueless flailing. In effect, Goodwin is the architect of Farage's excuses.

All of this gives him a veneer of credibility which rests on the prestige of Goodwin, who then benefits from the subsequent feedback loop. It's symbiotic. And because the TCJ won't entertain the likes of me where new information and different insights are neither welcome nor tolerated, it's a closed loop - and that's why they get it wrong. The only one among them who has a hint of self-awareness is Mark Wallace, but is too fond of himself to fully comprehend what is happening around him. Tim Montgomerie half understands it, but will blow whichever way the wind blows him. They will speak only among themselves. This closed loop is precisely why their perceptions are so wildly abstract from reality. As an outsider, it's fascinating to watch.

Meanwhile, outside of the Westminster TCJ bubble, Ukip is in the full beam of the media spotlight advertising its deficiencies. That the TCJ think Ukip will go on and on and on is to underestimate the intelligence of the British electorate. We may be pretty dim sometimes but we really know a charlatan when we see one. Farage can fool a lot of people a lot of the time, but we can see from his national approval ratings that he is a busted flush. His energy and ego can keep the juggernaut rolling but he can't grow it, nor can he keep it up forever. It could survive beyond him if it was acting like a real party and achieving things in local government and establishing a reputation, and it could grow if it were winning over constituencies like farmers and fishermen and nurses, but it's doing none of those things, so when he goes, the house built on sand collapses.

Farage has denied his health is failing. I will give him the benefit of the doubt, but his lifestyle of winging it and jetting off round the world and driving round the country is not sustainable forever. Many have remarked he looks and sounds jaded. In that I don't blame him. I was once a touring DJ and the glamour gets old real quick. Farage has been going at it for years and sooner or later the cracks will become more obvious. When the underlings and minions sense the fatigue and smell blood they will start setting out their own stalls and a very bloody and public civil war will take place. Whoever follows Farage will be incapable of keeping a lid on it. All of them are Farage lackeys and all of them are deliberately lightweight by design.

My own assessment is that the bubble will burst before the election if it hasn't already, but even if I did bend to the Goodwin assertion that Ukip will make major gains, they will be such odious people, consistently in the limelight that their first term will be their last. Goodwin is right in that there are numbers enough to form a coherent movement, but be under no illusions: Ukip is not that movement. If it was, I would be part of it. Politics is a repeating cycle. Ukip is the second incarnation of a what the BNP started. It won't be the vehicle that brings us the revolution, but what arises from its ashes just might.

We haven't seen the last poll bump from Ukip in that they now own the immigration issue and Cameron's poor performance on this will give them some gravitas, but single issues are knocked off the news agenda in less than a week these days. They can't keep banging that drum, and as with the BNP, as the economy improves, the public will get bored of it. I am.
Posted by Pete North at 09:32