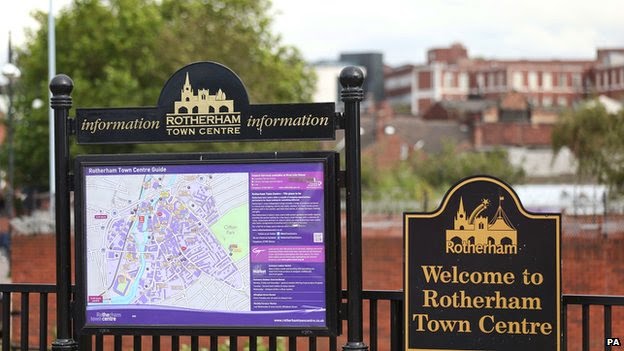 Ukipists have their settled narratives about Rotherham, It's all about Muslims, multiculturalism and political correctness. But it isn't. It's none of those things. A former Home Office researcher says a bullying culture at Rotherham Council led to her warnings of child sexual exploitation being suppressed in 2002, years before action was finally taken.


At the time of the claims, Ms Gladman was undertaking research for a Home Office pilot. But she found her findings about the scale of sexual exploitation in Rotherham were also met with denial. Previously, she has only spoken anonymously. "What I didn't realise was just how many whistle-blowers there had been over the years and how many opportunities to change poor practice," she said.

Ms Gladman was based at Rotherham Council when she carried out the work for the Home Office. She describes being subjected to bullying and intimidation after her research found a small number of men, mainly of Pakistani heritage, were sexually exploiting a significant number of young people.

She says the council sent her on race awareness training and effectively suppressed her report. "I had every aspect of my professionalism questioned," she said. "I had every aspect of my work questioned. I had data removed over a weekend so that I couldn't substantiate my findings. Fortunately I had made copies." She says the bullying she faced went beyond the local authority and remembers a police officer approaching her outside her office.

"He and a colleague said words along the lines of 'Wouldn't it be a shame if these perpetrators found out where you and your family lived'. "And I took that as a direct threat to my personal safety. The message was very clear."

Course kippers will only see the one aspect in this that suits their narrative, that the council sent her on race awareness training. This isn't political correctness. This is abuse of process to silence dissent - a bureaucratic technique, one among many, of averting future accusations of policy error or wrongdoing by deflecting responsibility in advance. Or as you and I call it, arse covering.

This is exactly what we saw with the Staffordshire NHS whistleblower. A report released at the time, by the Public Administration select committee highlighted a culture of "hostility, defensiveness and denial" where complaints are concerned.

It wouldn't matter if the council was caught up in bailiff fraud, mistreatment of elderly people, chronic hospital neglect, social services dereliction or child abuse. This is how our public sector responds to criticism. I don't know if the actions of the police can be substantiated but I'm not at all surprised. I've had police heavy boys telling me where the line was for this blog.

There is now very clear evidence that the root cause is nothing to do with Islam or political correctness, and it makes me all the more angry because as much as Ukip in their bigotry are digging the grave of euroscepticism, they are also paving the way for the next grubby council stitch-up where once again they real culprits walk free because bigots choose to bark up the wrong tree - and ignore the real lessons. This is the hypothesis I outlined back in August, for which I was called "tone deaf". Looks like the shame is on you.
Posted by Pete North at 16:14