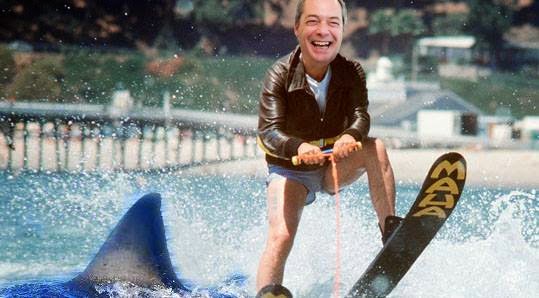 Ukip has jumped the shark. They have launched a new campaign advert claiming the Conservatives have failed on immigration. It points out the failure of Conservative ministers to succeed in their pledge to bring down net migration to "tens of thousands within this parliament".

It's a fair thing to say. The Tories did say they would bring down immigration. Turns out they haven't, but that is, as Ukip will never discover, easier said than done for any government. To make such a claim was a foolish error by the Tories.

But this advert tells us something. It tells us that Ukip thinks immigration is still their best bet for a campaign feature as we count down to the general election. This is a boneheaded. See, the thing is, it was the Ukip immigration posters that brought all the "anti-racists" out of the woodwork, who have been busy beavering away feeding into the public consciousness that Ukip are a racist party. It works too. You can fool quite a lot of the people a lot of the time. Whether it is or isn't a racist party is now irrelevant. Ukip is now on the backfoot to make the case that it isn't. This means Ukipists will have to spend more time defending their reputation than making their arguments.

You might argue that the controversial posters were a masterstroke that helped them cannibalise the BNP vote in order to do so well at the Euro elections, but after such rapid expansion, what Ukip now has is an ungovernable clan of moaners, united by nothing and prone to fragment if they come down firmly on a particular policy that isn't boilerplate "save the NHS" motherhood and apple pie stuff.

The inherent problem with this is that anyone who was going to be brought to the Ukip fold with this kind of politics already has. By staying the course on immigration, making the EU issue almost incidental, Ukip becomes primarily the anti-immigration party, which cannot grow much more than it already has, nor can it win, and can't win a referendum either. It appeals to a particular demographic; mostly grumpy old white men.

It is still a party campaigning on negatives, it still has no ideas to sell and beyond being a vehicle for a generic protest it has nowhere to go. Just look at the comments on the linked piece. "Anybody who votes LibLabCon at the next general election is a quisling." says a Ukipist. And I'm not cherry-picking either. Any thread on any vessel where Ukipists congregate you can find this boilerplate trash lifted directly from the Ukipist phrasebook. It is a limited repertoire.

Another remarks "As a Brit driven abroad for work due to Mass immigration it angers me that net immigration is used. It's white flight!!" Basically it's a racial concern; that British people taking full advantage of freedom of movement are people like them, escaping Britain because it's become a foreign land. In reality, people taking advantage of such freedoms are working abroad, experiencing life, starting businesses and making the most of life, primarily so they don't end up being miserablist Ukip scum.

Pandering to this element with more anti-immigration rhetoric does no bode well for our chances of leaving the EU, especially if these toxic idiots infest the comment pages to make the case for Brexit. These foul creatures are rapidly poisoning the well and will only cement the view from outside the cult that Ukip is a party of sneering losers, afraid of foreigners and would recklessly pull out of the EU overnight - and hang the consequences.

Any case for leaving the EU will have to be a moderate progressive one that expertly deals with the minutia of how it is done. Leaving it to the amateurs ensures we stay in the EU. As if our problems weren't big enough in fighting for Brexit, it seems eurosceptics have a lot of work ahead of us. We have a very short time to detoxify eurosceticism and reclaim it from Ukip so that decent people can be associated with it.

Ukip will go as far as it can with it's toxic anti-immigration agenda, with fools like Mark Reckless continually putting his  foot in it, until Ukip reaches peak exposure and peak appeal. It doesn't end well. Ukipists are deluded enough to think they represent the silent majority. They don't. Eighty per cent of Brits have no intention of voting Ukip and Ukip's growth since the euro-elections is tiny. As an anti-everything party is has no hope of ever broadening its appeal.

Odds are still on for a violent swing against Ukip. Sniffing around on a constituency by constituency basis, a lot of assumptions are going to prove false at the election. The general election is not going to be an extinction event for the Lib Dems, and while Ukip can affect the order of the runners up, it doesn't look like there are more than a couple of places where they can make a breakthrough, and it's by no means a dead cert that Mark Reckless will keep his seat.

It's looking like a two party squeeze as predicted, and because the Lib Dems will be hammered where they are not incumbent, any constituency where they finished second in 2010 will mean the incumbent MP keeps their seat. More than that, close to the election, the public mood will focus. We don't yet know the full effect as people take a long hard look at Ed Miliband and try to picture him as Prime Minister. Many may not wish to chance it, and who can blame them?

After the election, public interest in politics will tail off, as indeed it always does, and interest in Ukip will follow suit. By then, the whole of the electorate will have had the full dose of Ukip, and a belly full of their negativity, petulance and nativist isolationism. After which it will self-destruct in a bloody civil war. It can be no other way.

Whether something more palatable arises from the ashes is another matter. If it does, and it forms around an intelligible ethos, clarity of purpose and some detailed, credible policies, then I may pitch in and help it rebuild. But if it remains a diminished and sniveling anti-everything Fargista cult, then I will be glad to see the back of it so we can get on with fighting (and winning) a referendum. As it stands, Eurosceptics don't need scum like Ukip on their side - and the sooner they are out of the picture, the better.
Posted by Pete North at 12:58