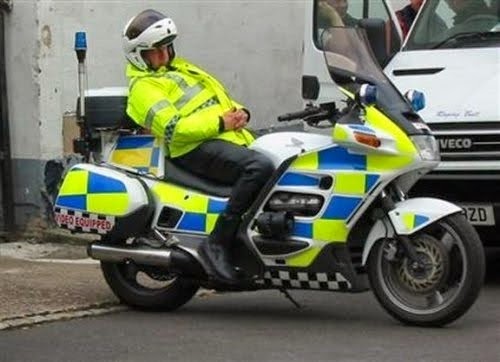 Scotland Yard is beginning what it says is the world's biggest ever pilot programme into the use of portable cameras worn by police. A trial of the cameras will see five hundred of them distributed to officers across ten London boroughs. Firearm officers will also use them in their training. This is a sign that trust in our police force is dead.

"Can we trust our police force?" asks Hugh Muir of The Guardian.  Let me cut to the chase here...  No. No we cannot.


"Policing is an idiosyncratic profession. It requires good judgment, it relies on trust, and as they operate within communities, the most junior officers go armed with the highest capacity to exercise discretion. These are people whose take on any given situation can affect people's lives." writes Muir.

Exactly.  One bad call by a plod and a chain of events is sent in motion that can destroy lives and take years to clean up, often stemming from mundane situations where the involvement of the police can make a bad situation immeasurably worse. So you might think that such a profession would require educated, moral, fit and capable people.

Were that so, we could then trust our police enough for them not to be hamstrung by diktat and directive. But that is not so. My own experience of the police is that they are gullible, fat, lazy, detached and, at times, dangerously stupid. I have only ever met one intelligent, fair-minded and trustworthy cop in my whole life and she was a Kiwi on an exchange programme. The problem is that the job simply doesn't attract educated, moral, fit and capable people. Those who fit that description have long ago left the force. The problems are varied and multifaceted but it comes down to broader matters of trust. The state doesn't trust the people, and the feeling is mutual.

As power is sucked ever more toward the centre and Whitehall has seized ever more control, we have seen a retreat of democracy. Our local authorities are merely regional development agencies and our local police forces are no longer local. We have police authorities covering regions the size of a hundred small countries, where local police stations have closed down, and the idea of a local policeman known to the community is just a quaint old story that our grandparents used to tell.

Our so-called "democratically elected" police commissioners preside over these mega-authorities, but are elected on the basis of feeble turnouts - and are essentially overpaid press officers. Policing is now a corporate scale affair; it is remote, disconnected and lacking the necessary autonomy to gear policing to the needs of our communities - and lacks the local knowledge to do so.  It is now a statistics driven command and control culture with policy made from the centre - where enforcement requires obedience rather than initiative.  Educated, moral, fit and capable people cannot work inside those restraints so the nature of the police has changed.

If police are not trusted by the state then they are not police, they are policy enforcers - and initiative is surplus to requirement.  But the state trusts the police no more than the it trusts anybody.  Everyone is suspected of something and we have laws so numerous that we are all breaking the law every day without even knowing it, and the state is making criminals of us all for petty transgressions that conflict with the cultural orthodoxy. The police we have are very much a product of that culture.

It follows then that if the police are merely enforcers of remote policy-making, their behaviour must be monitored by the state - and the public.  Smartphone camera footage is increasingly used as a means of protection against bad policing.  My own sphere of interest is the use of bailiffs by councils, where footage shows police actively assisting bailiffs in committing fraud - and allowing TV licensing officials right of entry where no right exists. This appears to me to be the norm rather than the exception.

Police are no longer public servants. They are herd managers along with social services, welfare services and the NHS, appointed to watch over us, coerce us, spy on us and to gather revenue for our overlords. If this is the police we are expected to contend with, then I not only want all interactions with them recorded, I demand it.

That is not to say this is a welcome development. It is merely a necessity for the protection of our rights. Until such a time as the powers of the central state are limited, local authorities have proper autonomy and democracy - and police authorities are sufficiently small enough to be accountable to the communities they serve (where officers of the law are known and trusted) - and there is proper recourse for complaints unlike the present culture of denial, camera footage is protection we need to have.  This is yet another reason why we need The Harrogate Agenda.
Posted by Pete North at 06:20