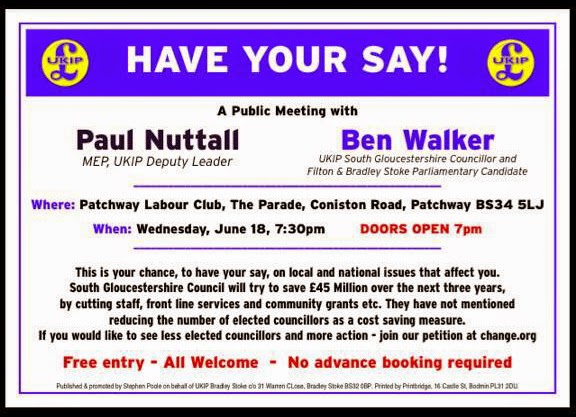 This evening I attended a Ukip public meeting and met my local councillor, Mr. Ben Walker.  I always have time for ex-Royal Navy people so I figured he can't be all bad. In fact, he's a thoroughly decent bloke and it's nice to know that somebody who represents me at least speaks the same language. As much I as I have made arguments as to why voting is a total waste of time, this man has my vote since while he can't change very much, what with councillors having very little power, it cannot possibly make things worse.

If I must bow to the archaic system of representative democracy then he at least represents me in most of the ways that matter. However, I do not come away enthused for Ukip. I raised several points about the lack of democracy and how councillors have zero influence in the big local decisions that affect us. They agreed but have not detailed any policy that addresses this.

Paul Nuttall in his speech pointed out that he has even less power than local councillors.  If that is what an Member of the European Parliament says then Ukip, while it has many elected members, does not hold a single lever of power worth having. The levers they have been given are not attached to any rope.

Nuttall can recite his twist on the election results, but more thorough impartial analysis does not support his optimism, and even if Ukip sweeps the boards in local elections, it accomplishes very little. I know Mr Walker heard and understood every point I made, but even with a Ukip dominated council, the council lacks the power to do anything. That is how the game is rigged.

When it comes to local politics my expectations of councillors are already so low they would have to work hard to disappoint me, but for what it is worth, Ben Walker is quite a good stick. I may even vote for him in a general election. It is my view is that if you vote, you should vote locally for the man, not the party. Given that Jack Lopresti MP is an absentee landlord of an MP, who delegates his official duties to his office junior and has a Patton complex, I'd rather have Ben Walker than someone who makes Ukip's more egregious councillors look sane.

Sadly I can't extend the same good will to Paul Nuttall. He is Farage's man through and through and his speech consisted of the same tired mantras Ukip has been preaching for years (even back when I was a Ukip candidate). If I can drive a horse and cart through his arguments, the pro-EU camp most certainly will in a referendum debate.

On the question of jobs and trade, he recited the usual Ukip tract, but it is wildly out of date and he falls into the same trap Farage does. I don't know how many times it has to be said that jobs depend not on the EU, but the Single Market. The two are not one and the same, and some nations enjoy access to the Single Market without being shackled to the corpse of the EU.

If Nuttall (and Ukip) had done the homework he would have been very easily able to bat away such questions without reverting to unfounded optimistic mantras.  Sure, they might well be entirely plausible mantras, but why use conjecture when you can use cold facts? But he could only do that if Ukip had a thoroughly researched exit plan.

As with the euro-election campaign, we got the same geo-polically illiterate spiel about foreign aid and immigration as though there were no connection between the two. I had hoped to outline to Mr Nuttall the precise relationship as I have detailed here, but it seems he was in a hurry to leave the venue without accounting for himself. This is the behaviour of agency DJ's on the clock, not party leaders.

I very much got the impression that he was a sophisticated Ukip android, going through the motions, possessing a degree of artificial intelligence so as to absorb any factoid that reinforces his mantras, but does not do much thinking of his own. That is not to say he is a bad man and on a personable level, I kinda like him, but he's not hardcore material. He's a man who will not pose any real threat to Nigel Farage, which is how Farage likes things.

That is what I primarily went to the meeting for. I wanted to know if Ukip had real ideas about how we are going to exit the EU.  It hasn't because at the very top of Ukip there is a lazy charlatan who is allergic to thinking. I now have it from the depty leader of the party that it has outsourced that kind of thinking and has done none of its own, and hopes to wing it on the back of work it has not made any effort to absorb. This is not good enough.

So I guess this is a tale of two Ukips. There are the grassroots with whom I share a great deal in common, and then there is the party machine which I believe to be unprofessional, lazy, disorganised, venal, arrogant and superficial. Nuttall mouths the platitudes of the need to professionalise but that has been said for years now, and there is still little evidence of it happening.  If I wasn't so adamant that we need to leave the EU I would find it funny, but with friends like Ukip... one doesn't need enemies. While Ukip is doing superficially well in the polls, it does look like things are sliding and as Ukip gains, the polls indicate we would lose an EU referendum.

It is my sincere wish that Ukip would up its game, but I do not see that happening under the current leadership and I certainly won't hold my breath. Like the Iraq invasion, deposing Saddam Farage might well have plausible benefits, but the power vacuum may lead to something worse.

It is for that reason I think Ukip has reached the high water mark and I do not hold much hope for a scenario where we actually leave the EU without resorting to more drastic measures.  Personally I have given up on voting as a mechanism for change. I still think The Harrogate Agenda is the best blueprint we have.
Posted by Pete North at 15:18