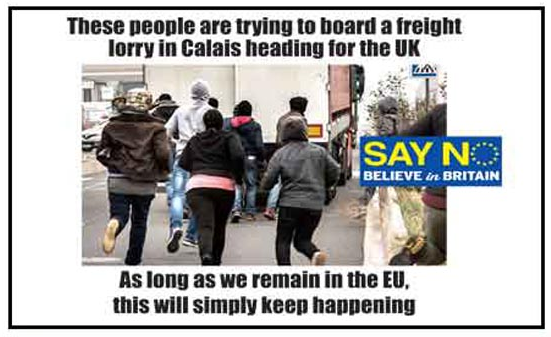 It seems Ukippers are too thick to understand this point so I need to be as succinct as possible and say this for the last time. I am sick to death of having to fight Ukip on this.

The moment Ukip started banging on about immigration, all the left wing came out of the woodwork and successfully, with some considerable help from Ukip, painted the party as far right and racist. We have already seen signs that the EU referendum campaign will be fought along similar fault lines.

The bottom line is that referendum campaign cannot be a left/right dispute. If it is we will lose it. If the no campaign is made up of unhinged europhobes without a positive and progressive message then we will lose badly - and be sucked into the EU forever. Ukippers are presently doing very well to live up to the characterisation of eurosceptics being xenophobic little Englanders - and publishing images such as the above puts Ukip in BNP territory. That's a fact.

More than this, Ukip is apparently not using the Ukip brand on these leaflets thus they are tainting the whole referendum effort as people will assume it is part of the official no campaign.

Immigration is not going to be the issue we win on because it can't win over the moderate middle. Chances are, those for whom immigration is a concern will vote to leave the EU anyway so there is no point in aiming the message at them. This is a referendum NOT an election. Our side needs to convince the people who would never in a million years vote for Ukip. And if stupid and wrong literature such as the above is going to be the imagery of our campaign then we might as well pack up now.

For now, the left wing are dipping their toes in euroscpetic waters, but there is every possibility their swing will be just as fickle if Ukip continues to poison the well. Were I not so heavily invested in this debate and if I were a person with only a passing interest in the EU, the vibe coming off Ukip would be enough to convince me to vote the other way. The stupid, jingoistic memes on Twitter make eurosceptics look like ignorant grunters and will deter moderate people from joining the cause. Ukip needs to shape up or shut up.
Posted by Pete North at 10:04