Only a miracle can save Ukip from oblivion 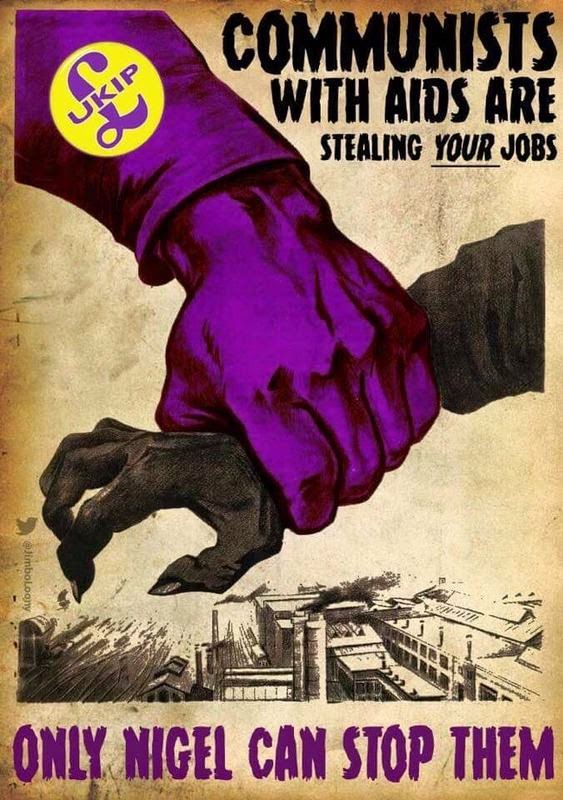 You don't have to be Alistair Campbell to know bringing up immigration and AIDS in the same sentence is political suicide. One might ask what was Farage thinking. But he simply wasn't thinking. We was winging it as usual, going through the motions with no preparation. That said, I can't say I blame him. He knows better than anyone that the game is up. At best he can tread water to try and scrape a halfway respectable vote, but even that is now looking remote. From the smell of things on Twitter, it now looks like the sympathy vote will peel away. The cracks are showing and even Carswell has had to distance himself from Farage's remarks.

It's now a waste of energy speculating what may happen to Ukip. Reckless is going to lose his seat, Carswell no longer looks as safe as he did and Farage will probably find he's blown his chances in Thanet. Mark Wallace of Conservative Home is still going over old ground based on how things looked a month ago. The post election scenario looks very bleak for Ukip.

There is nothing Farage can no do but manage decline but he will now make things worse the more he speaks. Nobody under him has the gravitas or the wit to hold Ukip together and things will fall apart as competing egos position for the crown. Carswell won't throw his hat in. He'll be tainted by association with Ukip and will be in effect sitting as an independent MP. If he's smart that is.

It then falls to either Tim Aker, whose only ace is the fact he's relatively unknown and not as dreadful as the others, but that advantage will slide as he becomes known. Woolfe is too much of a thug and just as much a lightweight as Farage. He won't listen to good advice either. So it looks like Suzanne "Grandma Death" Evans. She will go down well with the party, but the wolfpack will round on her and shred her. She's thick as pigshit and will blow it in no time.

As for their band of clowns in Strasbourg, without Farage that particular circus will produce items of ridicule on an industrial scale. The party will need Farage in Strasbourg if only to keep a lid on it, assuming he can still hack it and assuming he isn't now every bit as much the liability as the rest of them.

With no imminent threat of electoral successes the media will move on, shining a torch on Ukip only whenever it shoots itself in the foot. By that point, any publicity will be bad publicity. Soon after, it will lose a good portion of their councillors. Only a miracle can save Ukip.

My advice to Farage would be to walk away. If he keeps this up he won't see sixty. I know what burnout looks and feels like. He's not far of it and a man in his shape won't survive a heart attack. I dislike the man intensely but I do not wish death upon him. If Kippers want out of the EU, they best drop Ukip and party politics entirely, stop banging on about immigration, and gear up for the referendum because it looks very much like Ed Miliband is not going to be Prime Minister. Winning an EU referendum is more important than the survival of Ukip. Kippers need to accept that and move on.
Posted by Pete North at 06:08